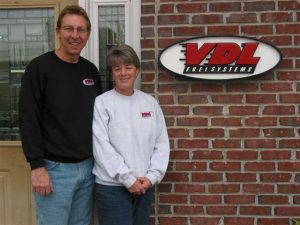 No matter what kind of engine or fuel you use, the real key to the combination’s performance is the carburetor bolted to the top of the power plant.  Just ask us at VDL Fuel Systems, now located in Mooresville, North Carolina after 22 years in the Mobile suburb of Theodore, Alabama.  VDL has quietly become one of the major players in the carburetion business – not because we try to mass-produce carburetors for everyone, but because we build them to customer need and customer specification.  Ironically, we have become so successful at doing this, many of the drivers and race teams that use our product don’t want anyone to know about it because they fear losing the edge they have.

That’s an unusual dilemma for us and owner Dan VanderLey who founded the company in 1998 after working for most of his life in the engine building business and other attendant positions.  VDL (its initials come from the name VanderLey) came about from Dan’s long association in the business.  He first worked for the family company, VanderLey Racing Engines.  He continued honing his skills in that arena while working with Pontiac – complete with an engineering degree – and then serving as an engineer for five years with Champion Motorsports where he learned everything there is to know about spark plugs.  In his years at Champion, he worked with most types of racing engines from Indy Cars to dirt cars and everything in between.  He also worked for two years as a track engine tuner for the likes of Gibbs Racing in the Craftsman Truck Series and with Dodge when they re-entered big time racing.  On the side, he was a major tech writer for Circle Track magazine and collaborated with some of the top names in the sport, including legendary mechanic Smokey Yunick.

Our major goal here at VDL isn’t to become the major producer of carburetors in the country.  Far from it!  “With my long experience in the field, I wanted to build a better carburetor and beat the other guys,” Dan says simply.  In order to do that, we have developed a simple but effective policy:  individual specialization.  “We do not stock our shelves with carburetors and send them out to customers if they seem appropriate for a certain application.  We build to the order, sort of like the Burger King slogan “Have it your way”.  We do this by staying current on all the technical applications of the latest racing engines and working directly with engine builders to make sure each carburetor is exactly what the customer needs.  There is no way that mass production of carburetors can be part of this equation.  We will not be everything for everybody, but we will be the best one at a time.